As a professional player I've been involved in countless musical projects in TV, radio and theatre

I got my first kit when I was 13 and was in my first band about a month later. The formal studies didn't begin till I was 16 and by 17 I was at music school and receiving lessons from Roger Hempsall. Post college, I spent some time as a house musician and writer for a local theatre company and after a series of small and not so small productions I ended up travelling and playing through North America, South America and the Caribbean.

As a professional player I've been involved in countless musical projects from pop, rock, jazz and big band to country and classical performances. This diverse range of playing situations led me to TV, radio and theatre work and to numerous venues and festivals around Europe and the Middle-East. In short I was on the road for 17 years straight.

As a player and a teacher I'm always looking to develop myself and have recently studied with and played alongside some truly amazing players.


"I first met Dave on the Ultimate Drum Experience in 2009 where he really stood out as an excellent drum teacher and player. His knowledge and skill behind the kit make him one of the best educators around."
Craig Blundell - Roland International Clinician
Frost*
Sessions 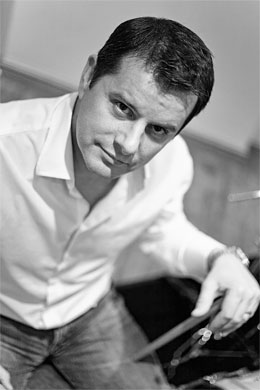